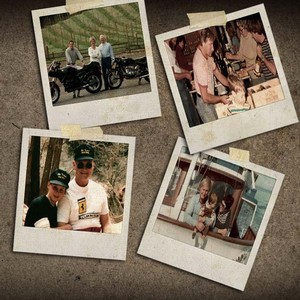 Gil Nickel was a visionary of the Napa Valley wine industry and the proprietor of Far Niente winery. He was also a gifted nurseryman, champion vintage auto racer, avid motorcyclist and guided missile analyst. While his passions were many, his friends and longtime associates agree that Gil was driven more by his ideals, loyalties, friendships and sense of humor, than his business interests. In the Fall of 2003, Gil passed away after a courageous battle against melanoma.

Born Harold Gilliland Nickel in 1939 in Muskogee, OK, Gil studied Physics and Math at Oklahoma State University and graduated in 1961. After college, he served with the Oklahoma Air National Guard and achieved a service ribbon for his tour of duty in Vietnam. At the conclusion of active duty, Gil relocated to Southern California, where he worked as a guided missile analyst at the United States Navy laboratory in Corona, CA.

Eventually, Gil returned home to Oklahoma to join his father, Harold, and older brother, John, in managing the family's Greenleaf Nursery Company, which was founded by Harold Nickel in 1945 as a small retail operation. Together, the brothers grew the nursery from its small-company roots to the second largest, family owned wholesale nursery in the United States, a position it continues to hold today.

In 1976, Gil handed over the day-to-day management of Greenleaf to his brother, and returned to California to pursue his dream of making world-class wine. Although it was only seven years earlier, at the age of 30, when he enjoyed his first taste of wine, Gil was driven by his passion to establish a Napa Valley wine estate. In 1979, after studying enology at the University of California Davis, making wine at home, and conducting extensive research into the state's vineyards and wine regions, Gil found the old Far Niente winery in Oakville, abandoned for 60 years and in disrepair. Three years later, after a meticulous restoration and excavating what would become the first new wine caves to be built in North America in the 20th century, Far Niente crushed its first harvest in more than six decades. Gil's work was rewarded with the placement of the property on the National Register of Historic Places.

Far Niente, located next to some of the most famous vineyards in the Napa Valley, including the Mondavi, Harlan, Futo, and Bond estates, became the place Gil called home, where he brought together the many loves of his life.  He created the extraordinary gardens that surround the winery, which, among many special plantings, hold the largest collection of Southern azaleas in California and perhaps throughout the West Coast. He constructed a carriage house to showcase his classic car collection, which he proudly displayed for visitors and generously shared with friends. Far Niente's legendary jewel-box beauty, stunning gardens, gracious hospitality, sophisticated style and exceptional quality at every level remain the hallmarks of Gil's legacy.

Gil later established another winery, Nickel & Nickel, which opened to the public in July 2003. The efforts of Gil and his partners to restore the 1880s Queen Anne-style John C. Sullenger home at Nickel & Nickel were recognized by Napa County Landmarks, who named Gil "Preservationist of the Year" at its annual awards ceremony in September 2003.

Rarely one to idle, Gil understood the value of living a full life, and pursued many other interests beyond the wineries. He enjoyed traveling and counted as friends people from all walks of life in many parts of the world. He was legendary for his ability to tell a story or quip an Oklahoma one-liner. An active collector of vintage cars, Gil held a healthy respect for driving fast on the racetrack and spent nearly two decades competing in and winning vintage car races around the world. In fact, Gil won several historic racing series in the U.S., and became, in 1995, the first American to win the European FIA Historic Sports Car Championship. He also satisfied his lust for the open road on countless motorcycle expeditions, logging a quarter-million miles on his BMW bikes.

Gil passed away in October 2003 following a long and brave battle with cancer.

* The Vineyard House is an independent business venture owned and operated by Jeremy Nickel and is not associated or affiliated in any way with the Far Niente, Nickel & Nickel, Dolce, EnRoute, or Bella Union wineries.